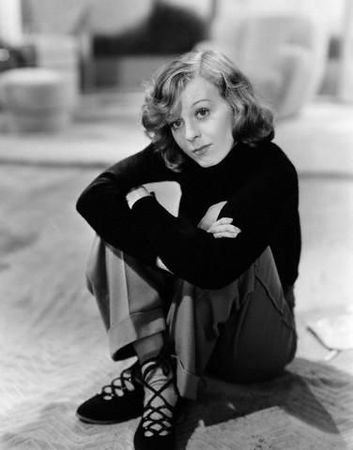 « The voice of Margaret Sullavan haunts the movies still. When you first hear it, it sounds limited and ephemeral, like Billie Holiday's singing voice. But Lady Day could do just about anything with her voice, and Sullavan's vocal range is limitless too, not hamstrung by particularity, but freed to roam wherever she chooses. She could bring it down low for a big booming growl; she could lift it up high, higher, oh higher!; or she could keep it in a middle register and break it into a thousand tingling laryngitis pieces. Sullavan made just 16 movies, and only one of them, The Shop Around the Corner (1940), is an accepted classic. (...)

« It was joked that she had a clause in her contract that required a lengthy death scene in each of her films; she seemed to be always dying. Gore Vidal wrote, "Margaret Sullavan was a star whose deathbed scenes were one of the great joys of the Golden Age of Movies. Sullavan never simply kicked the bucket. She made speeches, as she lay dying; and she was so incredibly noble that she made you feel like an absolute twerp for continuing to live out your petty life after she'd ridden on ahead." Sullavan dies in her first film, Only Yesterday (1933), and she dies in her last film, No Sad Songs for Me (1950). In between, she threatens to die in childbirth (Little Man, What Now?, 1934), nobly dies from tuberculosis (Three Comrades, 1938), nobly tries to die in a fire (The Shining Hour, 1938), is shot by Nazis (The Mortal Storm, 1940), expires in front of Charles Boyer's photograph (Back Street, 1941), and contracts a fatal case of malaria (Cry Havoc, 1943). In real life, Sullavan took pills and killed herself in 1960, at the age of 51. But she's not a gloomy actress; her characters are not portentous. In fact, her foregone tragic fate seemed to exhilarate her. She taught an audience the many ways of dying, yes, but she also showed them how to live: fearlessly, poetically. »