« My daughter Melissa is my biggest fan. About three years ago she told me that, much as she loved it, she couldn’t watch Two-Lane Blacktop anymore.

« She asked me why I hadn’t made a new movie in so long.

« I gave the usual excuses: I’d been developing great projects, peddling them to everyone in the business I knew, getting “close but no cigar.” She said, “Why don’t you stop waiting for someone else to give you permission to make a movie? Why don’t we take our lives in our own hands, and just do it ourselves?”

« I gave her the screenplay that Steve Gaydos had just finished, Road to Nowhere. It was based on experiences Steve and I had over the years making independent movies. Some of those experiences were generic, and some very personal. I was both drawn to it, and terrified by it. I’m a very private person. It’s not easy for me to expose myself to one person, let alone thousands or (dare I dream?) millions.

« Melissa loved the script, and told me she would raise the money to make the movie. She wanted to know how much I needed. I told her whatever she raised, that’s what we’d make it for.

« Never doubting she’d succeed, I enlisted the help of some of my students at CalArts. I tried the Red Camera, and thought I’d use it to shoot Road to Nowhere. Then I started reading about the Canon 5D. I bought one, and Josep Civit, my DP, flew over from Barcelona to test it. We shot some scenes in my living room, some day-for-night at a lake, and some night traveling shots, and took them to Fotokem to transfer to film. There was no loss in quality. We thought we’d use the 5D as a second camera.

« Then Josep shot a movie using the 5D on some scenes. The large sensor (more than twice the size of 35mm movie film or any other digital movie camera) gave the images the look of dye-transfer Technicolor in 70mm. We decided to buy two more 5Ds, and use them exclusively - the first feature film to do so, sparking a revolution, and inspiring the New York Times to call Road to Nowhere “as significant to the indie feature as Avatar is to the popcorn movie.”

« In the meantime, Steve Gaydos “discovered” Shannyn Sossamon in a restaurant, reading a script with a fellow “student.” Steve had been working in London for a number of years, and was unaware that Shannyn had starred in A Knight’s Tale and nearly two dozen other movies. He just thought she looked the part. I did too, but I was also aware of her work, and had wanted to cast her in a movie I was planning, based on her performance in Rules of Attraction. She was the first actor to come on board.

« Melissa’s first financing had fallen through, when suddenly, miracle of miracles, a friend called and told her she’d just inherited some money, and would invest in the movie. Melissa thought her job was over. I told her it had just begun, that she was going to produce the movie.

« I drove to North Carolina with one of the actors, my dog Moxie, while Josep flew from Barcelona. We scouted locations, including the spooky and magical tunnel at the end of the real Road to Nowhere, a two-lane blacktop begun by the Federal government to give local residents displaced by a new dam access to their ancient burial grounds. The road was never finished.

« We lost an actor, and I cast another over the phone. Melissa and the rest of the crew arrived. She set up production offices in the historic 100-year-old Balsam Mountain Inn, where we were staying, and where we’d be shooting a number of scenes in the movie. Still using a lot of my students on the production, Melissa hired professionals in all the key positions, along with a grip truck, electric truck, and costume, make-up, cast and crew trailers. We began shooting on July 13, 2009.

« Three weeks later we were ready to move to the next location, and discovered we’d run out of money. Since the plane tickets were already paid for, Melissa decided to continue on a wing, a prayer, and all the credit cards we could muster. A month later, we wrapped shooting in my living room in Los Angeles, where it had all begun. » 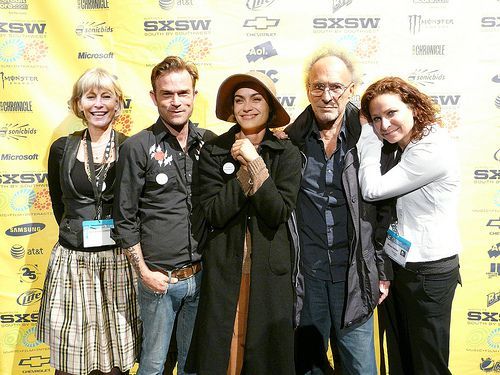