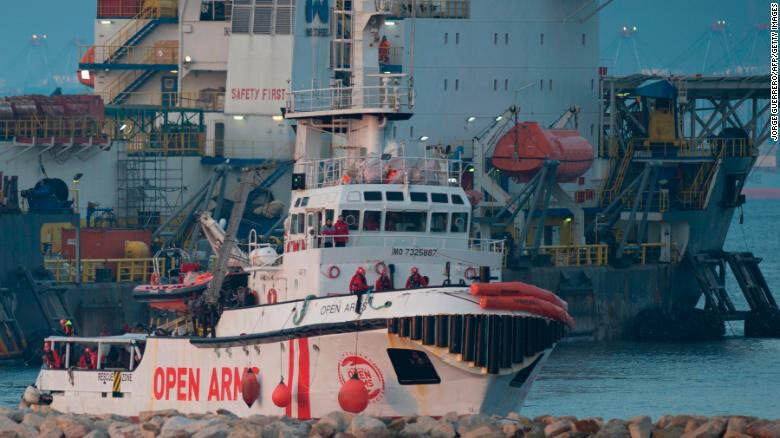 The UNHCR estimates that 2,275 migrants died in the Mediterranean in 2018. That's the equivalent of one death for every 51 arrivals last year.
For comparison, the death rate was one for every 269 arrivals in 2015, when more than one million migrants attempted the perilous crossing.
The UNHCR report, released Tuesday, says the higher death rate is partly the result of cuts to search and rescue operations on the Mediterranean. It also points to political standoffs between countries over who bears responsibility for migrants rescued at sea.
"In the continued absence of a consistent and coordinated approach within the region to rescue at sea and subsequent disembarkation, rescues by NGO vessels and possibly others (...) are likely to continue to be responded to on an ad hoc, case by case basis," the report said.
"As a result, there will be more situations in which often severely traumatized people are kept at sea for several days while governments debate where they can be disembarked. The high death rate is also likely to continue, given the worrying reduction in search and rescue capacity."
Several NGO rescue ships have been prevented from docking in recent months, as some Mediterranean countries -- most notably Italy -- have closed their ports to such vessels.
As a result, more migrants are now trying to reach Spain instead. According to the UNHCR report, the number of arrivals in Spain grew by 131% in 2018, whereas arrivals to Italy dropped by 80%.
Speaking to CNN on the sidelines of the World Economic Forum last week, Spanish Prime Minister Pedro Sánchez acknowledged the scale of the problem and indicated a desire to work more closely with Morocco - one of the main launch points for migrant boats arriving in his country.
"We need to strengthen our ties with countries of origin and countries of transit," he said. "Migration is a common challenge that we're facing - not only the Mediterranean countries, but all the European Union."

But within the European Union, there are deep divisions about how to respond to migrant arrivals. Since 2016, the European Commission has been trying to reform its system for processing asylum claims and resettling those who are granted refugee status.
A key aspect of the commission's original plan was a quota system to ensure a fairer distribution of migrants between all EU member states, with financial penalties for those who don't accept their full quota. However, several countries including Austria and Hungary have refused to agree.
Hungary's Prime Minister Viktor Orban used his first press conference of the year to again stress his country's opposition to the commission's plan.
"The Hungarian position is well known: only we should decide on who we live alongside. We do not support migrant quotas, we do not want a permanent immigration mechanism, we do not support migrant visas, and first and foremost money should be spent not on migrants, but on our own citizens," he said.
The political stalemate means the commission's plan will continue to be stuck in limbo. The European Commissioner for Migration Dimitris Avramopoulos says he will continue to try to convince country leaders to change their mind.
"It has become a huge political issue that is dividing Europe right now, and our role is to put together all these contradictory elements," Avramopoulos told CNN. "I can tell you, it's not easy. It is a huge challenge that has to do also with the future of Europe."
"Populists are exploiting the migration issue and they try to convince us that we have not done the right thing."
Avramopoulos says he would like to get agreement for his plan before European parliamentary elections in May -- an election which could reshape the political landscape and tip the balance in favor of anti-migration lawmakers.
Posté par : charles tatum à 08:37 - Commentaires [0] - Permalien [#]